I am glad that this time you have decided to receive my message through dictation. It is good practice to change the mode of reception whenever this is possible, as you will gain so much more confidence and accuracy. Currently it is very easy for us to enter into contact, provided that you find time and a quiet place.

I want to continue writing about the spheres of the spirit world, and with today’s message we arrive at the sixth sphere. It will be a difficult chapter to explain, because even for us, the nature of the sixth sphere still presents a series of questions which we cannot answer. I already see that you have guessed what I am referring to. But we will speak of that later. Firstly I intend to explain the condition of the inhabitants of the sixth sphere.

As you already know, when spirits of the fifth sphere are able to purify their souls completely of sin, they have the opportunity to advance and to enter the sixth sphere. The great majority do so, only some of the Divine Love spirits prefer to stay in the fifth, because they feel that this advance or progress would only be an apparent progress. Many of these spirits however venture ahead, more out of curiosity in order to learn of the paradise that their “natural” mates so much yearn for, but they return disillusioned after a short time.

The sixth sphere is a purely intellectual area, and when I say intellectual, I refer to the fact that in spite of the great spirituality of the place, the zeal of its inhabitants goes much more for increasing their knowledge, while they live a life in absolute harmony with God’s laws of spirituality. It is a place where science has reached its most spectacular results compared to all the spiritual spheres, and where the intelligence of its inhabitants is supreme, and where absolute fraternity exists, such as people dream of on earth.

Religion plays an important role, but the mere fact that there are many diverse religions in this zone, demonstrates that its inhabitants are not yet in possession of absolute truth. You have already read messages where this situation is described, indicating that spirits coming from diverse cultures live in separate communities, happy with each other, but that there is very little contact with spirits outside their respective societies. Inside these communities there are subgroups, based on special interests. It is a paradise of immense happiness, where some kind of semi-truth reigns, and where the only possible progress is the accumulation of intellectual knowledge. In the universe of God there is so much we may know, so that we will never reach absolute knowledge throughout all eternity. But as for the soul, in this case a natural and totally purified soul, progress no longer exists beyond what has already been achieved.

And herein lies the great problem. We don’t know what will happen with these spirits. They cannot remain without development through all eternity. You already understand this problem. This contradicts the Law of Change. And they also fully realize that.

Well, in order to continue, if I tell you about the great inventions and scientific discoveries, I don’t want to suggest that life in the sixth sphere consists only of such studies, no, there are great social events, amusements, all of which provides them with great happiness, their class of happiness. Paradise, yes, the sixth sphere is the paradise which the Hebrews dreamt of and continue dreaming of, and it is the paradise that Christian churches teach of, in general, and also spiritualists.

The spirits of the sixth sphere no longer keep up much contact with mortals. Messages from them are not very common. You know that Mr. Padgett received some, but the reason was the curiosity these spirits felt when they saw Mr. Padgett surrounded by another class of spirits, namely of Celestials. Those of the sixth sphere, however, do continue helping lower spirits along their way, and many are dedicated to the work of teachers and professors in the lower spheres.

Good, I cannot tell you much more. I would love to describe to you the atmosphere that reigns there but it is impossible.

Yes, it happens, of course, that spirits of the sixth sphere decide to follow the Celestial pathway, mainly when they already possess some of Divine Love, which has lain inactive in their souls throughout all their development, and suddenly awakes and arouses longings in them for something more when they no longer feel filled with this paralyzing satisfaction. This happens at times when we talk to them and tell them of our world. But, as I told you, in most cases we only meet deaf ears. It is also the true that when they want to change their destination, they have to return to a lower sphere where they may find better conditions for the development of their souls in Divine Love. This can be the third sphere, sometimes it is even the fifth, it depends on the amount of Love they already possess.

With that I finish my discussion of the spiritual spheres. Next time we will speak of the seventh sphere, which is not yet situated in the Celestial Heavens, but which you may consider as the antechamber.

My dear brother, I like the portrait you drew of Andrew. Yes, that was his appearance. He was a rather short man, somewhat fat, well, not so much fat as stout, and by that I mean he had a very muscular body and tremendous physical strength. His hands were huge, callous and firm, weather-beaten from long years of hard work as a fisherman. He didn’t speak much, and he had a rather introverted character, unlike his brother Peter. But he had a heart of gold, which he still has now, even more precious.

Andrew works a lot with mortals. And I owe him a lot, yes, in fact I owe him everything. Throughout all the time of my progress towards the Celestial Heavens, he accompanied me and helped tirelessly. We still visit each other frequently, although we don’t live in the same place.

It is time to say goodbye. It is thundering, so you’d better disconnect your computer. I am happy that your gallery of portraits is taking form already. Very soon I will project another image of one of my old companions into your mind, and you will be able to try your talent as an artist once again.

May God bless you always,

Your brother in Christ, 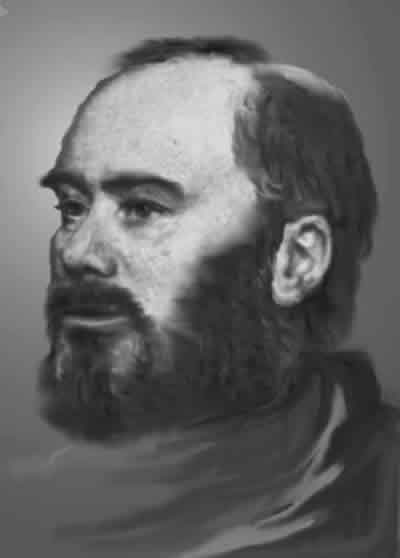 © Copyright is asserted in this message by Geoff Cutler 2013