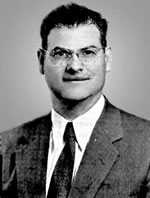 Dr. Samuels attended Boy’s High School 1922-24 and New Utrecht High School 1924-26. He was a graduate of City College (New York) in 1930. He received an M.A. from Columbia University in 1931, and a Ph.D. in Philosophy from Columbia University in 1940. His proficiency was romance languages and journalism, which he taught in both secondary schools and colleges/universities. He also worked for the US Government as a translator.

He met Dr Leslie R Stone in the fall of 1954, while he was employed by the University of the District of Columbia as an instructor in Spanish. The meeting took place in a park in Washington, DC, near Dr Stone’s residence.

A friendship sprang up, and it was soon realized that Dr Samuels was able to take automatic writings. Jesus urged Dr Samuels to pray for the inflowing of the Divine Love of the Father into his soul, just as 40 years before he had urged Mr Padgett to do the same.

In late 1954, Jesus directed through Samuel’s mediumship that a trust be formed to serve as the repository for the truths he had revealed through Mr Padgett from 1914-1923; this trust was to be called The Padgett Foundation.

However, when Padgett’s name could not be used due to the objections of a living relative, Jesus honored Dr Stone in the naming of the trust, and the Dr Leslie R Stone Foundation was incorporated in the District of Columbia on the 21st December 1955 by Dr Leslie Stone, Dr Samuels and Rev. John Paul Gibson.

2nd January 1958, in order to gain federal tax-exempt status, a new entity was incorporated called the Foundation Church of the New Birth. The three gentlemen, Dr Leslie R Stone, Dr Daniel G Samuels, and Rev. John Paul Gibson, served not only as the Founding Trustees but also the administrators of the church until their demise.

While many of his messages are not questioned, there remains some doubt in the minds of some of the followers of the Padgett messages regarding the purity Dr Samuel’s mediumship. This was addressed in a later message from Jesus, and clearly indicated that we the readers are as much responsible for the ascertainment of truth as the medium. This should be born in mind by the reader. However Dr Samuels has returned to give a message in 2006 that indicate he was overly concerned about the building of a material church. He has also discussed his passing over. It would appear from the records of The Social Security Death Index held by Ancestry.com that Dr. Samuels died in March 1982, and as he was born on 18th May 1908, that would make him 73 at the time of his death.