Publicly available information on James Edward Padgett and his family.

Dennis Tormey and his wife Susie have completed a massive research into the background of the Padgetts and the individuals mentioned in the messages who were known to James Padgett. This was presented in September 2014 at the 100th anniversary of the receipt of the first message, appropriately in Washington D.C. area, specifically at a conference centre in Chevy Chase. The amount of information he has gathered is staggering, and the only “unknown” at present is a picture of Helen Padgett. I have converted the 60mb PowerPoint into a pdf, which is not perfect, but is far smaller at 43mb, and would suffice for most people who feel a need to answer the question - were these guys really there at that time? It could take over ten minutes! As a result, if you really want this, I suggest you contact me through the contact form.

I am leaving the simple information on this page, at this time, but it’s a bare snippet of what is in this pdf.

Added May 2002. It would appear that James Padgett’s beloved daughter Helenita, referred to as baby or Nita, died on Thursday evening, June 20th 1918, and was buried at Mount Olivet Cemetery, Frederick., Md on Saturday June 22nd at 2pm. This information was published in the Baltimore Sun on Saturday morning, 22 June 1918 as follows:

The Census records indicate that James’ father was a butcher. James first worked as some sort of finisher in a factory. And he possibly became interested in the law profession because one of his neighbors was a lawyer. James and Helen, when they had their children living at home in 1900, that they lived in a home and had a servant (her name name was Annie Wilson)?

The son of James and Helen, Edward Riddle, had a second marriage in Detroit (Michigan) in 1920. The name of Edward’s second wife is Dora (Simpkins). This may be the Dora mentioned in Padgett’s tablet on December 12, 1918.

In the 1870 US census Ann Rollins (now age 65) was then living with her daughter Ann, wife of John H Padgett.

In the 1880 census things become a bit complicated. James’ father had apparently died, for only James’ mother is listed (now age 45). She and her two sons, James E. and Isaac R. are listed as boarders, living in the same house with James T. Harrison (age 46) and his wife Eliza J. (age 39). Also, Ann Rollins (now age 76) is listed as the mother-in-law, having consumption, and living in this same house.

So we may conclude that James’ mother, Ann, is a sister to Eliza.

Here is the obituary for James Padgett as found in the Washington Post Newspaper 1923:

Born in Washington, Mr. Padgett received his early education in the public schools, later entering a University in Virginia. After completing his education he became connected with the law firm of A. G. Riddle, later becoming a partner in the firm, then in business under the name of Riddle, Miller & Padgett. For several years he was a member of the law firm of Riddle, Padgett & Davis, and during his latter years he was associated with William H. Manogue.

Mr. Padgett was a member of the Association of Oldest Inhabitants and the District of Columbia Bar association. He is survived by two sons, Edward R. Padgett, connected with several Baltimore newspapers, and Henry H. Padgett, of Chicago.

And the next day:

Funeral services for James E. Padgett, life-long resident of Washington, will be held at the undertaking establishment of the William H. Speare Company, 1208 H Street northwest, at 8 o’clock tonight. The body will be cremated. Mr. Padgett was prominent in legal circles here for many years, having been associated with several well-known law firms.

As we are aware James Padgett probably remarried based on comment in the tablet about “Ella”, it is surprising there is no mention of his new wife in these notices. The entries in the tablet that refer to Ella are as follows:

“Oct. 16, 1919 glad that the Master wrote as he did - must not let my love for Helen interfere with my love for Ella - make me a good wife - has highly mediumistic powers - wish she could come in her apparently human form to me and tell me of her love - not displeased at my loving Ella - must do the work - Mary anxious to write - Baby progressing - in the 5th sphere”

But this entry is found in the 1930 census records:

Where this Ella Padgett lived in 1930 is about 6 miles from the location that Leslie Stone mentioned in his testimony where he said James Padgett lived in 1914. (This now appears to not be any relation, as she existed prior to James and Helen splitting up.)

Helen’s father was George W. Heyde. He is listed in the 1870 US Census as a minister. In 1870 they were living in Maryland, and later moved to Washington, D.C.

According to the 1880 census information, the Heyde family were now living in a large home in Washington, for they also had a servant and a boarder in addition to the three children. The father is listed as a minister.

It is possible that James Padgett met Helen at her father’ church.

James and Helen married December 15th, 1880, and their first child, Edward Riddle, was born in February 1882. She is buried in Mt Olivet, Cemetery, Frederick, Md. and Helenita is also buried there.

Yes, Helen’ maiden name was Heyde and her full name is actually Helen Worman Heyde. I found her maiden name a few years ago while browsing under Padgett’s name and it led me to her mother’s obituary. It reads:

THE WORK OF DEATH

Mrs. Olivia Heyde, wife of the Rev. George W. Heyde, died of heart trouble yesterday at her home, 103 Jackson Place, Baltimore. She was the daughter of the late John O. and Barbara Whitehill, of Frederick county. She had been active all her life in charitable work. Mrs. Heyde was secretary and treasurer of the Society for the Relief of Widows and Orphans of Seamen and an earnest worker for the Free Summer Exouraion Society. For many years she had been president of the Whatsoever Society of King’s Daughters of the Seaman’s Union Bethel. She is survived by her husband and three children, the latter being Dr. Eugene W. Heyde of Parkston, Baltimore county; Mrs. James E. Padgett of Washington, and Mrs. Howard D. Adams, Baltimore.

The remains will be brought here tomorrow, arriving at 12:05 p.m., and will be interred in Mt. Olivet cemetery. The funeral will take place from the B. and O. depot and the service at the grave will be read by Rev. Mr. Castle.

Here is also Helen’s obituary. This is rather odd because it refers to her as Mrs. Heyde and not Mrs. Padgett but this is definitely Helen. It reads:

The funeral of Mrs. Helen W. Heyde took place yesterday afternoon at 2:00 o’clock from Mt. Olivet Chapel. The funeral services were conducted by the Rev. Douglas Hoolf. Interment was made in the Mt. Olivet cemetery. C.C. Carty furnished the pall-bearers and was the funeral director.

(This was recorded in the Frederick Post dated Feb. 16, 1914 - so Helen was buried on the 15th.) There were other funeral notices however which used the name Heyde Padgett.

Photos of the grave sites for both the Heyde family and the Padgett family in Mt Olivet Cemetary. Larger photos can be obtained by clicking on the photo.

We have in 2012 become aware that James and Helen separated in September 1910, and this is confirmed in a previously unpublished message from Helen that has recently come to light. This probably explains some of the entries above, where Helen appears to have reverted to her maiden name. Here is a image from a newspaper of the filing for divorce in October 10th, 1913: 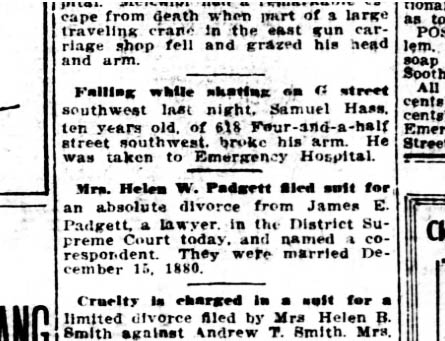 Dennis Tormey has discovered the notice of dismissal of this divorce action, indicating that Helen and James never went through with the divorce.