Mr. James Edward Padgett was born August 25, 1852, in Washington, D.C. and attended the Polytechnic Academy Institute at Newmarket, Virginia. In 1880 he was admitted to the bar in Washington, D.C., and thereafter he practiced law for 43 years until his death on March 17, 1923, in his 71st year. During his student years, he became friendly with Professor Joseph Salyards, an instructor at the Academy who, after his death in 1885, wrote him many interesting messages. His wife, Helen, who died in February 1914, was the first to write him from the spirit world. Padgett never practiced the gift of mediumship as a means of earning money. He was dedicated wholly to the reception of the messages signed Jesus and his many disciples.

Dr. Leslie R. Stone wrote the following remarks about Mr. Padgett (Washington, D.C., May 1941 and published in the First Edition of Vol I):

“Mr. James E. Padgett was the instrument used by Jesus, and many spirits of the Celestial Heavens to receive their messages of spiritual truths that they are anxious should be made known to all mankind.”

“Mr. Padgett was at one time Assistant District Attorney, Washington, D.C., an able lawyer with a high standing at the bar. He practiced law in the District of Columbia for more than 40 years. He was born August 25,1852, in Washington, D.C., and passed into the spirit world March 17, 1923.”

“He obtained these authorative messages from many spirits of the Celestial Heavens from 1914 to 1923 who all corroborated that Jesus wrote through him by controlling his brain and hand.”

“I was closely associated with Mr. Padgett from the time he started to receive the messages from the high spirits up to the time of his passing over into the spirit world.”

“He was directed by Jesus and many Celestial spirits to pray with all the earnest sincere longings of his soul to the Father for the inflowing into his soul of the DIVINE LOVE that comes from God by His Holy Spirit, and was told that when he should obtain this love in sufficient abundance it would then change the quality of his brain into the necessary spiritual condition, and high quality, so that it would be possible for Jesus and the Celestial Spirits to make that close rapport with him, so that these high truths could be written through him.”

“He took the advice of these high spirits, and prayed with all the earnest sincere longings of his soul to the Father for the Divine Love. After awhile, he obtained a sufficiency of this Love, and then, that close rapport that Jesus and the Celestial Spirits desired was made. Mr. Padgett was then successful in receiving communications that have never been communicated to a mortal since Jesus taught them on earth. After his early followers died, many of the great and most important truths that he taught, and which are the fundamental and basic truths of Christianity, have been lost to mankind.”

“Jesus in one of his messages wrote - He will never come again in the flesh, yet, he has come again in the form of these revelations, through Mr. Padgett, which he taught on earth nearly two thousand years ago, and which he is still teaching in the spirit world and so are his followers.“

“I was often present with Mr. Padgett in his room when he was receiving the messages from the Celestial Spirits. And I now want to say, with all the emphasis of my soul and being – that I have a firm conviction in the genuineness of the same. And I know that if any man could have felt the wonderful love and power that Mr. Padgett and myself often spoke of and experienced, during the time the truths were being revealed, and when we discussed them, they would never have a doubt that Jesus and the Celestial Spirits were actually present and were the high spirits who have communicated.”

Further information about Mr. Padgett can be found in “My Testimony” by Dr. Leslie Rippon Stone.

TESTIMONY OF DR. FRANCIS A. GOERGER

“I knew him to be a man of a very lovable and kindly disposition, as well as an able and conscientious lawyer, with a high reputation at the bar, having been acquainted with some of his associates and often heard them speak of him with the highest esteem as a lawyer and a man. I was present with Mr. Padgett in his room on some occasions when he was receiving messages, which he explained to me were communications from the spirit world, and which were received by him without any interposition of his own mind. He also told me that while he was receiving the writings, he did not know in advance, what the next words or sentence written would be, and when receiving these writings, that he was instructed by spirits, that a necessary acquirement on his part was, that his mind must be kept in a passive and inactive state so that his own thoughts would not interfere with the messages transmitted through him and then they would be able to write the exact words and sentences that they were anxious to be made known to mankind.”

After Mr. Padgett’s passing, he communicated within a few days several messages to his friend and co-worker, Eugene Morgan. These are included in the list below.

Note. Publically available information on James Padgett, such as grave sites are set out on this page.

Quite recently the question was asked: “What was Padgett’s experience after death? Did he find things to be as he expected, and did his spiritual progression turn out as he expected?” In the messages recorded from James Padgett, you will find out the answer is a resounding yes. In fact in his message dated July 1st, 1925, only two years and three months after his death, he confirms that he is a “Celestial.” This is the term used on this site to define one living in the eternal realm, beyond the Spirit Spheres.

Communications received after his death.

Here is a recently discovered picture of a young James E.Padgett: 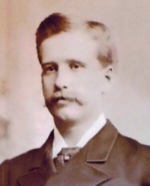 The history of the various churches that were founded is set out on this page.