The Spirit Heavens and the Christian Kingdom of God

What happens in Life after Death - especially for Christians.

Orthodox Christians who arrive on this web page may be thinking that the word “heaven” is the word often used in the Bible as the Kingdom of God. It is not. This diagram may help illustrate the construction of this aspect of the realms that lie beyond this material realm. 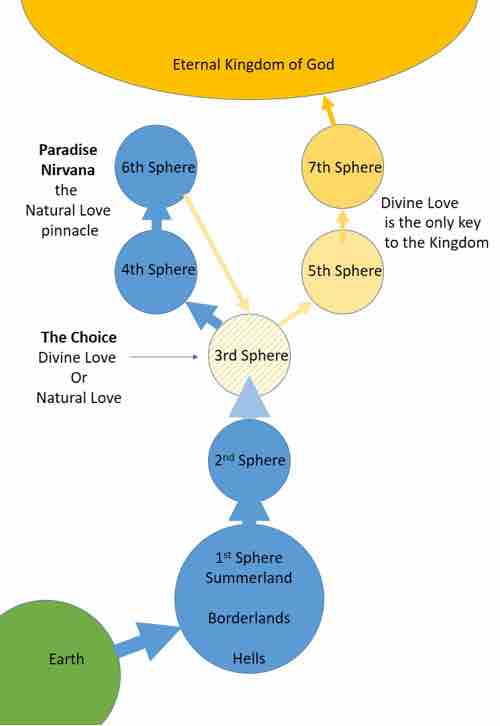 Here, on this site, we use often the word “Celestial Heavens” to refer to that which Jesus called “The Kingdom of God”. And here the confusion starts, because we find that there are a whole bunch of “heavens” below, and inferior to “The Kingdom of God.” These lesser heavens we have called on this site Spirit Spheres or Spirit Heavens (but which is not labeled on the diagram other than as a sphere), and they are shown in the diagram numbered from 1 to 7. These spheres are similarly numbered in the Urantia Book, but called Mansion Worlds there.

This distinction is the root cause of so much confusion by orthodox Christians, and their insistence on all other folks going to hell. Quite simply, they are right that Jesus taught how to enter the Celestial Heavens, but they are not aware that the Spirit heavens always existed, and are open to everyone, dependent only on soul condition for your location in them. And, as far as we know, no Christian has yet managed to proceed directly from being a mortal, to the Celestial Kingdom, although in theory it is possible. (It has been communicated that a very small number have achieved this.)

However those that are following the path of rebirth of the soul by spirit progress up the right hand side of the diagram, through the spheres 1, 3, 5 and 7. Those that do not, and may for example be intellectuals who are either disinterested in a Creator, or who do not believe in Him, or believe in a non-personal “god” can still progress from 1, 2, 4 and 6. They can also be religious, but have chosen not to pursue the way of Divine Love, either deliberately or in ignorance. They do not progress any higher than sphere 6, but this is a very happy state of affairs for them, and they are content with their lot.

The spirit heavens are just as physical as our world. In fact we are told that 80% of all matter resides in the Spirit worlds, invisible to mortals. The heavens are carefully structured so that like lives with like - if this were not the case, disharmony would result. To achieve this requires a complex system of progression, so basically souls can and do progress, becoming ever more refined. As a result there appear to be many spheres and sub-spheres, with planes within these, within the heavens. It is the case that there are sub-spheres where only Catholics live, only Mormons, only Jews, only Muslims etc, and certainly there are also cultural groupings, as opposed to religious groupings. However the heavens are really divided into two sections. There is the Spirit Heavens - which culminates in the Biblical heavens - the sixth Sphere. We are told that souls in this Sphere are as perfect as when they were created, but they progress no further. They cannot see God, as they do not have much development of their souls, but they are in all respects again perfect. Many have great development of their minds and intellect.

The Celestial heavens lie above these Spirit Spheres. (Or may be yet another dimension beyond) Only those souls which have been transformed by the Divine Love (brought by the Holy Ghost or Holy Spirit) are able to enter these Spheres. This is the Kingdom of God that the Bible speaks of, and indeed, as set out there, it requires rebirth by spirit to enter this Kingdom. As souls progress in the Celestial Spheres their soul perceptions are enhanced until they are able to perceive God, through their soul perceptions.

I have just completed a comprehensive summary of “Getting the hell out of here - book” which includes material from this site and others regarding the structure of the heavens. This is in the form of a booklet. But here is a pdf: Getting the Hell out of here.

It is a relatively simple summary, largely devoid of any religious connotations. A web page is also available.