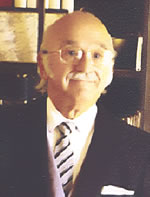 This extract of events in Dr Gibson’s early spiritual life is taken from the book “He Walks with me. True Encounters with Jesus.” by Brad Steiger and Sherry Hansen Steiger published in 1998.

Dr. John Paul Gibson had always been confused by certain religious matters until a most remarkable thing happened to him in New York in 1945.

A total stranger in a restaurant began a discusson with him about the spiritual gifts of God and mentioned the fact that new revelations had come to his attention in a book entitled “Messages from Jesus and Celestials”1 that had been received through the gift of automatic writing of James E. Padgett in Washington, D.C. And then, to Dr. Gibson’s delight, his new friend presented him with a copy of the book.

Upon a close examination of the inspired volume, Dr. Gibson found that his personal search for the “Truths of the Father,” that, in his evaluation, fulfilled the Second Coming of Jesus on Earth, had been realized in the words received by James Padgett. For the next three years, he studied Volumes I and II of Padgett’s transcriptions, and he based sixty sermons on their texts. During the same time, he corresponded with Dr. Leslie R Stone, the editor of the books, who suggested minor revisions in the sermons, then granted permission for Dr. Gibson to use them as he saw fit

“Dr. Leslie R. Stone was a close friend of James Padgett, and he was present when he was receiving communication from the various spirit writers,” Dr. Gibson explained to Brad Steiger in correspondence some years ago.

“Some evenings Padgett received as many as forty pages of material through the gift of automatic writing. Jesus and the other celestial writers were able to write through him after he had received Divine Love in sufficient quantity.”

After many visits to Washington, D.C., and a ten-year association with Dr. Stone, Dr. Gibson became concerned about the safety of the many writings left by James Padgett. At that time, less than half of the material had been transcribed or printed, and Dr. Stone was getting along in years. Dr. Gibson began earnestly to suggest that some kind of foundation be established to preserve this new gospel of Jesus.

In the fall of 1955, Dr. Stone informed him that Jesus had selected a second instrument who was qualified to continue the work where Padgett had left off. On November 7, 1955, in his hotel room in Washington, D.C., Dr. Gibson witnessed the first message from Jesus through the new receiver. The communication affirmed Dr. Gibson “among the disciples who are working to spread the Word of God” and offered the other members of their group encouragement for the establishment of a foundation that would preserve the new revelations.

Several meetings with attorneys in the next two months produced the resolution of the final details that would permit the incorporation on January 12, 1956, of the Dr. Leslie Stone Foundation, so named to honor him for his thirty-year service on behalf of the Padgett writings. On January 2,1958, the Foundation Church of tiie New Birth was established, replacing the Stone Foundation, which had been found to be unworkable for a successful church operation with a tax-exempt status.

Dr. Gibson said that at the first meeting of the new church, bylaws that were two years in preparation were submitted by the secretary and approved by their leader, Jesus of Nazareth, Master of the Celestial Heavens.

“At the close of each meeting thereafter, we waited for comments and instructions from our Leader regarding the business at hand, either approving or disapproving the items.”

Note 1 As this volume was first published in 1956, this seems unlikely to have been the volume he saw in 1945. There were identical earlier volumes but with different titles. Probably Dr Gibson preferred to refer to the title of books that were actually in print, rather than out of print titles.